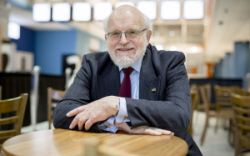 Howard Gosling has a Joint Honours Degree in Biology and Chemistry and a Higher National Certificate in Mechanical Engineering and has enjoyed an illustrious career in the water treatment industry.

In the mid 1980’s he helped write the initial UK SPATA Standards which remain almost unchanged to this day. In 1987 he was elected as SPATA representative on the Pool Water Treatment Advisory Group and helped co-author the Pool Water Guide published in 1995. He founded SPATEX Ltd in 1996 and is a director to this day.  He has co-authored the Swimming Pool Water Book and helped re-organise the Trade Associations in the UK under the British Swimming Pool Federation. Early in the new Millenium he was invited to become a Member of the London and Three Counties Water Group of the Health Protection Agency at Colindale and later became a Member of the Spa Working Group set up by the HSE/HPA to produce Management of Spa Pools.

Howard was elected a Fellow of the Royal Institute of Public Health in 2007 (now Royal Society for Public Health). He was Chairman of the Pool Water Treatment Advisory Group from 2007 – 2010. He works as an author, lecturer and trainer in specialist recreational water treatments as well as being an Expert Witness in the preparation of court statements specialising in Legionnaires’ Disease and Cryptosporidium. He is a Department of Transport certificated Dangerous Goods Safety Advisor (DGSA).

Sign up to receive the latest updates from SPATEX.